After Chelsea’s humiliating 6-nil defeat to Manchester City, PL Analysis goes through the possible solutions that could permanently revitalize the Blues. 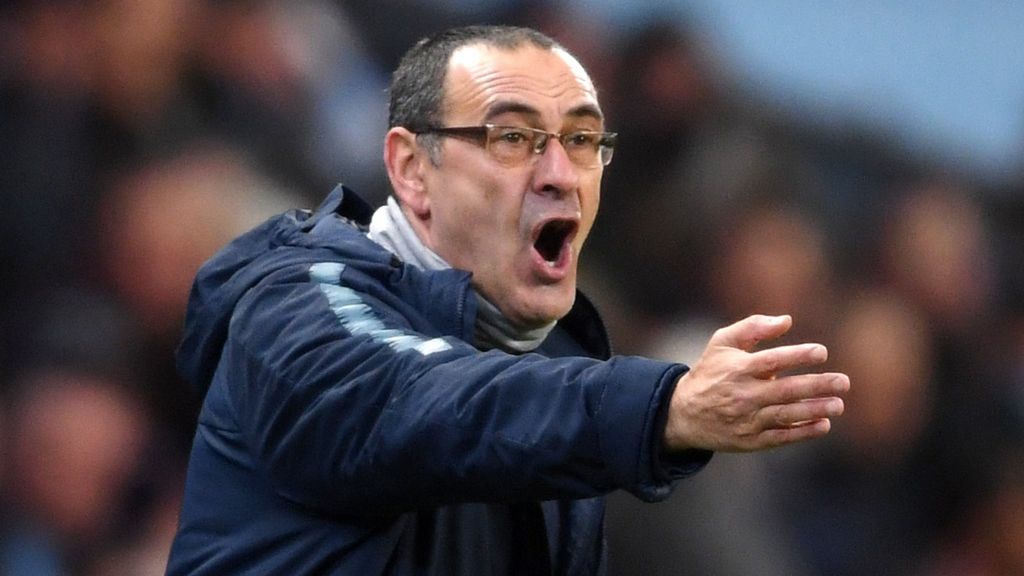 Maurizio Sarri, at Italy, was once renowned for his ability to mastermind big wins and create attack minded teams that won the hearts of footy-loving Italians. In fact, last year, almost everybody around the world rooted for Napoli to snag the Serie A, with their stellar team, only to be crushed by Gonzalo Higuain and his Juventus side. Abramovich, who has not seen such football at his club since the days of Carlo Ancelotti, seemed Sarri was the man to do the job. Everything started out fine, and at some point in the season, Chelsea were even regarded as title contenders. But then it took a few sour games and things have turned grey for the Blues and Maurizio himself.

However, despite the fact many Chelsea fans refuse to agree, Sarri does have a philosophy that could work for the club. With the crop of players he’s got, the Chelsea hierarchy could do with being patient with the Italian tactician.

Despite Maurizio Sarri being convinced that the world’s best destroyer of play can be effective in a more attacking role, the truth is that N’golo Kante is more of a Claude Makelele than an Andreas Iniesta. Kante’s greatest strength his is supernatural ability to detect and snuff out danger before it actually happens, and his desire to burst lungs for the good of the team by galloping from box-to-box. Maurizio Sarri once said he likes a more technical player in that role that made the dimunitive midfielder a superstar, and has opted for Jorginho, but many teams have exploited the Italian’s inability to protect his back four, leading to costly defeats Chelsea could have avoided if Kante had been deployed in that deep-lying position. Besides, now that Kante has been fairly taught the roles of the attacker, he can be ideal to Sarri’s future plans. 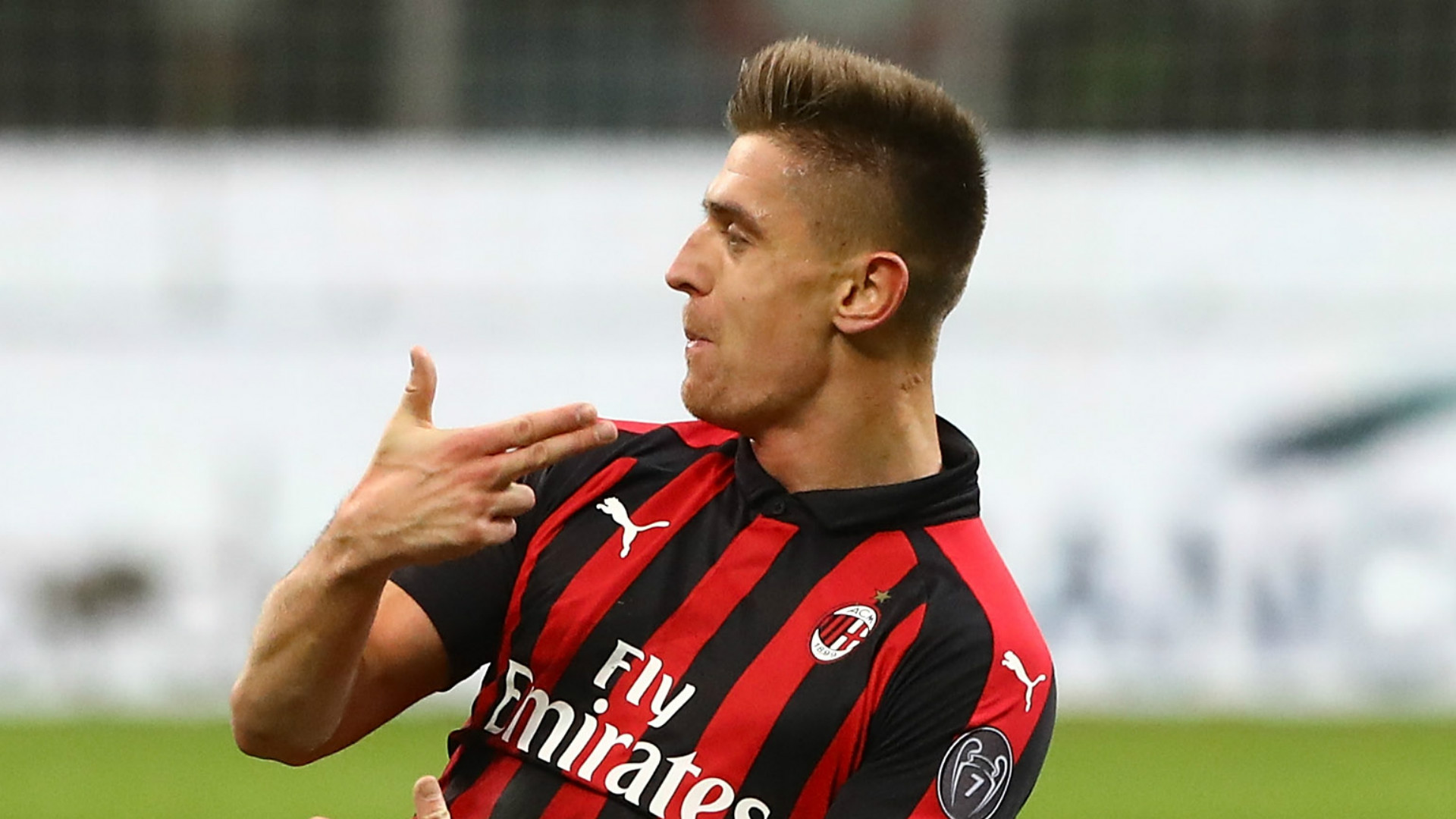 There is no doubt that Gonzalo Higuain is a goal scoring beast. His feats at Real Madrid were mind-blowing, and his record of most goals in a single Serie-A season is yet to be broken. However Higuain is 31, which means he is nearing the end of his peak, and soon, Chelsea would have to face the fact that they might have to scout for a new striker to live up to the greats of the past, like Didier Drogba and Jimmy Floyd Hasselbank. Piatek, at AC Milan is a good fit, whilst Mauro Icardi, who is at conflict with his club is another choice. Whatever they do, Chelsea should start looking for a genuine young center-forward/striker, because that is what wins championships. 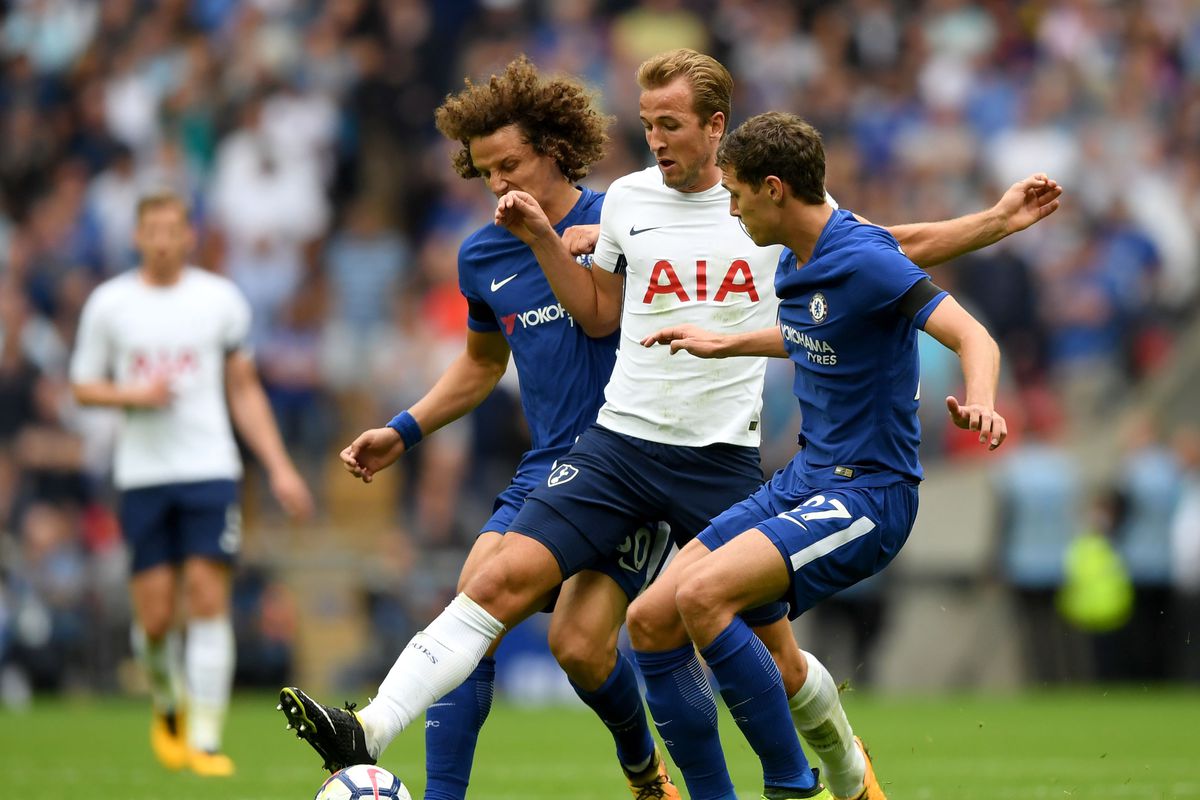 There was a time where the frizzy-haired Brazilian was one of the most imperious center back. But now, he’s basically a playmaker who hides under the tag centre-back. His ability on the ball, his passes, and his vision are beyond extraordinary for a defender, but his defending, well, eh, is not something to be admired. Luiz, in his 30s, is a great deal older than Christensen, who has not done bad when called up by Sarri. Is it time for the Brazilian to go? 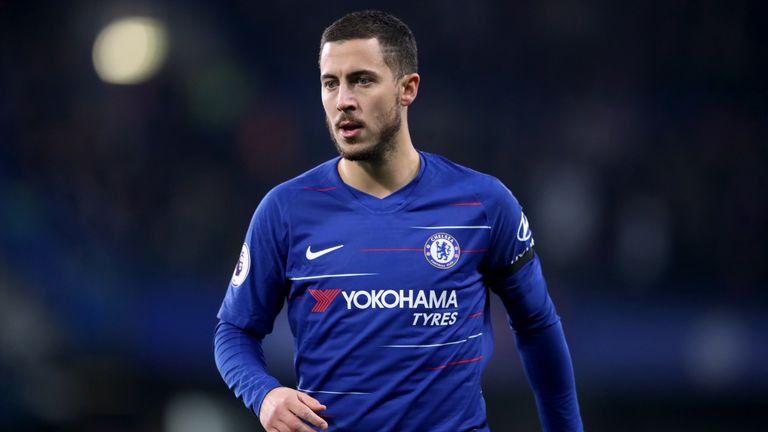 The Belgian magician is one of the league’s standout players, as his 10+ goals and 10+ assists show. Hazard in his late 20s and entering his prime should be the center of Chelsea’s attention at the moment, and as he enters the final years of his contract with the Blues, and with Los Blancos seemingly interested, Chelsea should do all in their power to keep their best player at Stamford Bridge for a little while longer.

What do you think Chelsea should do to become feared again? Tell us in the comments below.

Picture this. It’s April 2018, and Manchester City, under the skillful guidance of one of the world’s best coaches, Pep Guardiola (Bald, likes wearing sweaters.), are in a poll position to win the league.

No one could challenge them at this stage.

They had over a dozen points over their red-wearing neighbors, Manchester United. They had scored over eighty goals as a team, had a superior goal difference, and had only lost once throughout the whole season, where they fell to the might of an attacking Liverpool side at the Anfield, an epic game by itself.

Man United were not doing bad themselves, sitting in a 2nd place spot, and were edging closer to an FA Cup Final. However City played much better football to United, slick, purposeful passing, superb awareness and clinical finishing when it mattered most, compared to Mourinho’s prosaic football, holding on to tight one nil, two nil games by closing out the opponents possible routes to goals.

Man City had a formidable defense, the creativity of David Silva and Kevin de Bruyne, the speed of Sane and the ruthlessness of Aguero and Gabriel Jesus. But United had a world-class midfielder in Paul Pogba, and the best goalkeeper in the world, David de Gea.

United went to the Etihad knowing that a defeat to City meant that the title was ensured for the Sky Blues, a painful defeat the Cityzens were itching to implement. It was truly a match to watch. 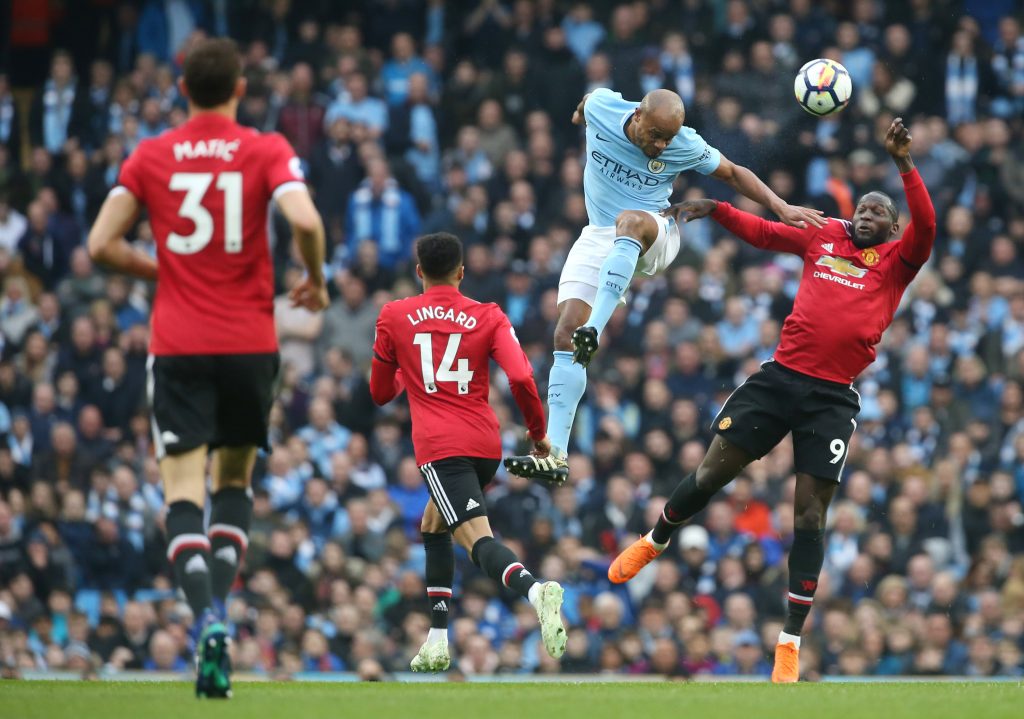 City started off how they’ve been all season, allowing United scraps of possession and getting the ball into dangerous areas. However United too seemed to be playing with lackluster, their players looking either dull or frantic.

Soon the best team of the half had their deserved goal, a bullet header from City’s inspirational captain Vincent Kompany after some poor marking by Chris Smalling. A few minutes later City has their second with Ilkay Gündogan completing a sublime 360 to fool giant Serb Nemanja Matic, before sending a good finish into David de Gea’s net.

They could have had more goals before the first half ended, hadn’t it been for de Gea’s knee that denied Raheem Sterling. At half time, the footy world seemed to agree: Manchester City were to lift the title that very day, with Man United to be the clowns of the circus. 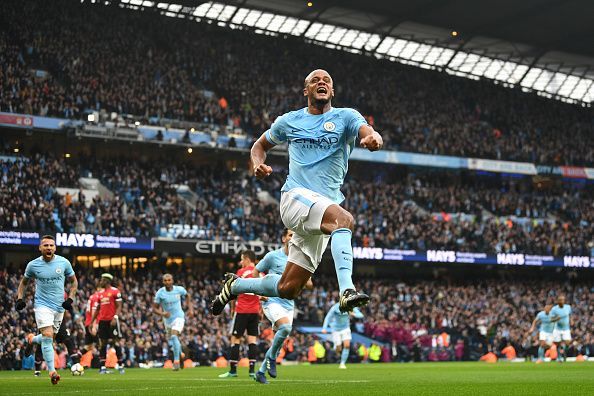 “If only you knew the second half bruv.”

Everybody expected a similar second half, but as soon as the whistle blew for the remaining forty-five minutes, United sprayed balls forward, and even had a shot at goal, a sharp contrast to the first half where they had only one touch in City’s box.

Suddenly, the red half of Manchester had something to smile about: blue-haired Frenchman Paul Pogba pulled the Reds back with a goal after some good team play.

Then, suddenly United were level with the leaders, with another goal from Paul Pogba, and suddenly, it looked like the immortals of English football were crumbling.

Then not long after, it was 3-2, a smart volley from a man who caused the error to the first goal, Chris Smalling. United were winning, and were winning with football that had been hardly displayed during Mourinho’s United reign. 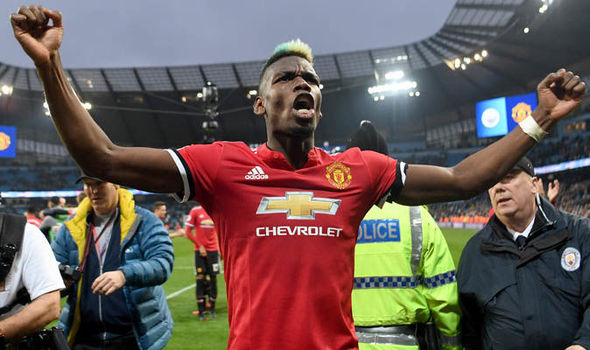 Pep, determined, brought on his big guns, who he had been resting for a crucial Champions League Quarter Final against Liverpool. Kevin de Bruyne and Aguero were introduced, spelling doom in bloody red letters for Man United.

City bombarded furiously, with Ashley Young fortunate to have not conceded a penalty, and David de Gea producing a worldie of a save to deny his best friend, Kun Aguero, a chance of winning City’s third PL crown. The minutes eventually passed, and Man United came out victorious. 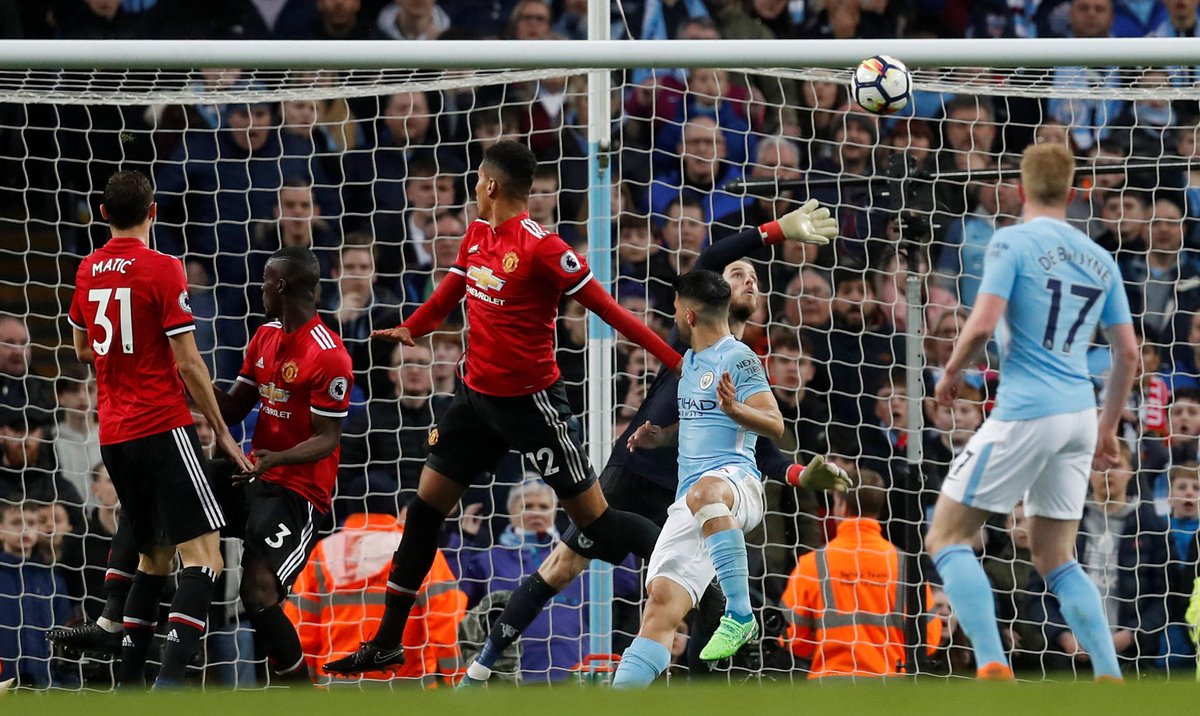 Too bad they lost to last-place West Brom the next week.